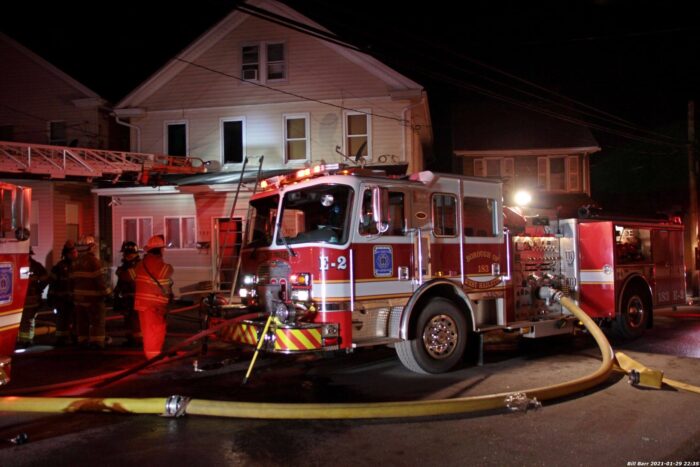 On Friday January 29th, 2021 at 9:28pm 183 Station and Medic 11 were dispatched to 324 North 5th Street in West Hazleton for a reported residential structure fire. West Hazleton Police arrived on scene quickly to find a two and half story duplex with smoke showing. The residents were evacuated upon Police arrival. Engine 2 arrived and hit the hydrant at McNair Street/Boundary Street and laid a supply line to the scene. Crews found out the hydrant caps were frozen and had to use tank water for the initial hit.

183 Truck arrived and took placement at the front of the structure with 183 Engine 1 hooking to supply 183 Engine 2 with tank water. Interior crews reported fire between the floor of division one and two towards the back of the building. Greater Hazleton Ambulance was then requested for rehab.

183 Chief arrived and took North 5th Street command. Command requested Hazleton City Engine 2 to reverse lay a supply line from 183 Engine 1 to a hydrant at Tamarack Street/5th Street. Hazle Township Fire was requested for a Truck and Engine to the scene. Hazle Township and Hazleton City crews arrived and rotated in for fire suppression and overhaul. Hazleton City Engine 4 was then requested by command to stand at a hydrant at Allen Street/Jefferson Ave in case an additional water supply was needed. With an aggressive interior attack, the fire was held to the back of the building.

Sugarloaf and Valley Regional were then requested for manpower to assist. Sugarloaf Rescue along with Valley Regional Rescue 1 & 2 arrived and manpower assisted in overhaul. An investigation into the cause of the fire determined it was electrical in nature. The temperature at the time of dispatch was 13 degrees with a wind chill of near 0. Crews had to fight icy conditions along with frozen hydrants during the initial attack. The building sustained moderate fire and smoke damage. West Hazleton Streets Department, PennDot, PPL, and UGI all assisted.